Mines, Sinkholes, and Other Fun Stuff 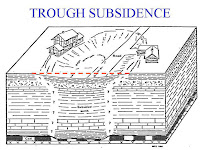 I heard that they want to build houses over the old gypsum mines on Roll Road. What a wonderful idea (roll eyes). I can remember, as a child, hearing the booms as they dynamited in the mines. That's what led to this:

I was roaming around the internet, reading some of my usual blogs when I wandered over to DeputyDog (I click on the links a lot). He has some wonderful photos of "7 Amazing Holes" - large mines, "glory holes", and sink holes.

One thing led to another, and I came upon stories of mine pillars collapsing and causing sinkholes, which pull buildings and roads down into the ground due to land subsidence .

"Land subsidence also occurs in areas of underground mining where removal of material causes overlying surface rock to sink or collapse. Although the locations of underground mines are often denoted on topographic and geologic maps, the potential subsidence hazard from a mine requires evaluation by a geologist."

"Similar to land subsidence due to underground mining, subsidence can also result from chemical weathering of soluble rocks (e.g. limestone, dolomite, gypsum). As groundwater flows through limestone, a chemical reaction causes the rock to dissolve, eventually forming cavities within the bedrock. As a cavity near the surface increases in size, the overlying materials can sink or collapse and create a depression on the land surface."

Tar Creek, OK is one town that has been subjected to sinkholes and threats of mine collapse for years. There are also the real toxic threats from the dust to the air and acid mine water that contaminates the water table. While it was zinc and lead mined there, gypsum , used primarily in wallboard, has its concerns also:

"In the early 1980s, landfills in British Columbia were found to be producing toxic gas and leachate from concentrations of gypsum debris that had been buried for as little as two days."

One would think that the Town of Clarence would want to shield itself from future lawsuits. There can be all kinds of studies, but that doesn't mean that the earth won't do it's unpredictable thing and shift. Then again, Amherst is off the hook for it's sinking homes.

The prevailing thought just might be that if they're insurable, and the Town's not liable, go for it. Add to the tax base and services needed, subtract from green space. Just think twice before buying a house there.
Posted by Becky at 5:12 AM No comments:
Labels: Current Events, Environment, Land Subsidence, Miscellany, Other Blogs, Town of Clarence

I just bought my first issue of WNY Heritage magazine. It obviously has been out for a while, since this is Volume 10, and I may have even seen it in the past, but I never actually focused on it before. It's a bit pricey, but well worth the money. It is very high quality paper and has a selection of well written, in-depth articles with

many historic photographs and illustrations of history in Western New York.

The Summer '07 issue is currently on the stands, for a little while anyway. In it there is an article on midget car racing in the old Buffalo Civic Stadium. This may sound familiar, as it is something I wrote about in the article about Parker alumnus ('47) Bill Rafter. Sure enough, Bill gets a mention near the end of the article (page 51), along with a picture showing him driving in a winning race. Of course, there's a current picture of him in the Parker Reunion pix, sans car. The article is written by Keith Herbst, author of a book on auto racing 1935-1960 in our area, called Daredevils of the Frontier.

Later on, as I was browsing through the Definitely Buffalo Store in Main Place Mall, I came upon an assortment of back issues. Rather than return them to the publisher when the new one comes out, the proprietor keeps them as an edition to the historical books she carries. So I picked up another one. I'll probably end of with one of everything she has!

I have quite the collection of non-fiction books and magazines that I've read part of, and mean to get back to "someday", and that I use for references. The WNY Heritage magazines are worthy additions.

*UPDATE* I have read the entire Summer '07 issue and am working on the other one now. The magazine is definitely very interesting! 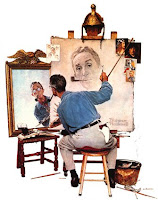 Most of us were born and raised in Clarence. It can go back even further if our parents, grandparents and so on were also part of the historical fabric. We could have departed the town upon turning 18 and never looked back, or stayed where it is familiar, near family and friends. Or behaved like a yo-yo, leaving and returning, for good or for a visit.

Those who made a conscious decision to move here, rather than it being an accident of birth, tend to see Clarence differently than we do. On the campaign site of Alan Bedenko, he makes this observation:

"Labor Day in Clarence Center is Authentic Americana. It is a Norman Rockwell painting come to life."

I never thought about it that way. I guess when you're busy living it, the picture is too close to be seen with an objective eye. Then again, as the painting by Rockwell shows, sometimes what we see and reality aren't on the same page.

Some of the most enthusiastic boosters of Clarence have no long time history in town. They never knew Clarence when it actually was a rural area. They don't know that the removal of the agricultural exemption for inactive farm land opened the floodgates for subdivisions.

They do know that Clarence is rich in history, and that it should be remembered and celebrated. Working with the Clarence Historical Society they have dusted off parts of ourselves that previously existed only in the archives of what "used to be". Of course, the seniors are richer depositories of life in Clarence than books or documents could ever be.

They have put together various events and associations and groups to draw people together rather than existing in a vacuum. Of course, the Garden Club and Chamber of Commerce and Firemen have been around almost forever, but now there is so much more.

For the anonymous members of "They" - both those with deep Clarence roots and those whose roots are newer - I salute you! Newer Clarence embraces Older Clarence for One Clarence.
Posted by Becky at 9:28 AM No comments:
Labels: Nostalgia, Town of Clarence
Newer Posts Older Posts Home
Subscribe to: Posts (Atom)