Clarence alumna ('71) Rebecca Simpson Stryker was killed in a motor vehicle accident on November 26, 2013, along with her husband and a son (one of twins). May they rest in peace. Strength and comfort to the surviving children and family. 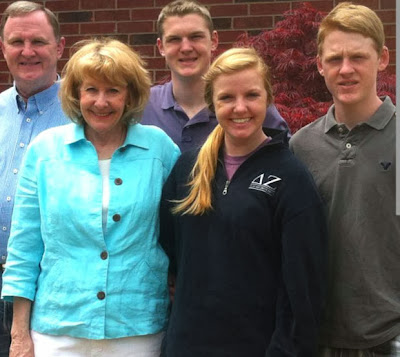 Three members of an Allen family were killed when their van collided head-on with a car on a highway in a remote area of northern Arizona. The Arizona Department of Public Safety identified those killed as 60-year-old Rebecca Simpson Stryker, 56-year-old James Lee Stryker and 16-year-old Travis Stryker. A twin brother of the teenager, 16-year-old Austin Stryker, was seriously injured and hospitalized in Flagstaff. NBC 5 learned that his sister flew to Arizona to be with him.

According to family friends, the Stryker family had just visited the Grand Canyon and was on their way to a hockey tournament for the teenagers in Las Vegas.


The family traveled often together. Travis, who died in the crash, had just traveled to Paris and Rome over the summer.
The family was also passionate about hockey. Travis played defense and Austin played goalie. Travis’ Instagram account, which he updated with a photo of his brother at the Grand Canyon just hours before the crash, had an outpouring of support, and family friends also took to social media to voice their grief.
“Our hearts are broken,” said Sarah Ross, a close friend of the family. “Hold your family tight this Thanksgiving and be thankful for everything and everyone in your life. You never know, in a split second it could all be gone.”
The Dallas Junior Hockey Association has started a fund for the Stryker family. You can find it on their website at www.djha.com. A family friend also told NBC 5, Austin could be back in North Texas as early as this week. The Dallas Stars plan to honor the Stryker family at Friday’s home game versus the Chicago Blackhawks.

There is a page for the Stryker Family on Facebook: https://www.facebook.com/Strykermemorial