There was a great article in Sunday's Buffalo News regarding the Vitascope. This was the first motion picture theater actually designed for this purpose. It was located in the Ellicott Square Building in downtown Buffalo, and the area still exists at the bottom of a spiral staircase.

This reminded me of a photocopy of an article I had laying around from Business First of Buffalo, week of February 24, 1997. It is of Buffalo's first gas station (according to family history), located at 179 Ellicott Street. That number on Ellicott no longer exists and is probably part of a larger parcel owned by the NFTA.

The picture was taken in 1917. The founders of the business were Irish immigrant brothers - (as pictured) Andrew, Adam, and John Harbison (my grandfather). Their names grace the walls of Ellis Island.

Harbison Brothers Inc. was originally founded as a maker and re-builder of wooden barrels in 1893 by Adam and Andrew. John, a younger brother, joined them at a later point in time. Harbison Brothers now reconditions and recycles steel drum barrels and is operated by the descendants of Adam Harbison.

In later years Andrew would be involved with a lawsuit against the City of Buffalo (Harbison vs Buffalo) . It seems he had been operating a cooperage on Cumberland Avenue since 1924, which was then an industrial area. Years later people built homes around him and wanted him out. The farmers in "rural but becoming residential" areas can probably empathize with his position.

One of the attorneys on the case was William J. Ostrowski, father of attorney and writer Jim Ostrowski, founder of Free New York. This case is still cited in various existing non-conforming land use cases throughout the country.

Eventually Adam and John would move their families from Buffalo to Clarence, while Andrew moved his to East Aurora.

No word on what the price of gas was in those days.

(**Update** I wrote a correction/addition on January 8, 2008, as some of the dates don't quite jibe)
Posted by Becky at 5:38 AM 8 comments:
Labels: City of Buffalo, Clarence Connection, Environment, Genealogy, History, Other Blogs

"Staff Sgt Mark Spence was an extraordinary leader and soon to be father for the first time. The 24 year old Clarence native had been treated to a ride on a blackhawk helicopter because of his exemplary work repairing hi-tech sensors used on fighter jets. But the chopper suddenly malfunctioned and crashed Thursday near Mark's airbase in Aviano, Italy."

"Spence graduated from Clarence High School in 2001, completed a year's study at the University at Buffalo, and then joined the Air Force in 2003.

"I'm tremendously proud of my son and the job he was doing," his father, Mark T. Spence, said today.

He is survived by his wife, Elena (Ward); his parents, Mark T. Spence and Kim Rhoads-Spence; and two brothers, Robert and Michael."

The obituary from the Buffalo News:

From the athletics tracks in the Clarence Central School District to the way he accelerated through the ranks with the U.S. Air Force, Mark A. Spence lived life at a fast pace.

Staff Sgt. Spence died Nov. 8 in Treviso, Italy, of injuries suffered in a military helicopter crash. He was 24.

Born in Buffalo, Sgt. Spence attended school in Clarence, where he went from being the fastest runner in an elementary school track meet to competition with the cross country and football teams at Clarence High School.

He graduated from Clarence High in 2001. After studying briefly at the University at Buffalo, he joined the Air Force in 2003.

Sgt. Spence completed basic training at Lackland Air Force Base in San Antonio, then attended electronics and avionics technical school at Keesler Air Force Base, Biloxi, Miss., earning an associate degree in avionics systems technology. He also was recognized for his leadership abilities.

Sgt. Spence quickly rose through the ranks and was an avionics sensors team leader, heading a crew of eight that maintained weapons guidance and navigational systems for F- 15 and F-16 fighter jets.

A member of the 31st Fighter Wing, Sgt. Spence had been stationed at the Aviano, Italy, Air Base since January 2004. Scheduled to return home in January, he planned to take the New York State Police exam. He was studying for a bachelor’s degree in criminal justice from Park University, where he maintained a 4.0 grade point average.

Survivors include his wife, the former Elena Ward, who is expecting the couple’s first child next spring; his parents, Mark T. and Kim; two brothers, Robert and Michael; and his grandmothers, Evelyn Rhoads and Alice.

The notice from the Buffalo News:

Clarence Class of '72 Banner is Up 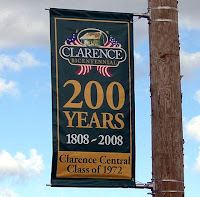 The Clarence Class '72 banner is finally flying high in the sky! It is located on Gunnville Road, about 3 poles down from Main.

Rumor has it that the Class '61 also bought one and wanted it over by the Town Park, but I haven't roamed that way in search of it yet. I'm also not sure if any other class put in an order. If there are any more around town I'll put up the pictures when available. That way those scattered around the country, or otherwise out of touch, can see them too.

There may be some of you without a clue as to what I'm talking about...The Town of Clarence will be celebrating it's bicentennial next year and has been actively promoting it. One of the projects involves the placing of banners throughout the town, sponsored by individuals, groups, and businesses. More information is available at the Bicentennial website.

Those of you from the Class '72 email list have already seen the picture that Howard Payne took. I tried too. However this one, taken by Karen Roberts McPherson, managed to accomplish the seemingly unobtainable lately - blue sky!
Posted by Becky at 5:39 AM No comments:
Labels: Clarence High School Alumni, Town of Clarence
Newer Posts Older Posts Home
Subscribe to: Posts (Atom)