Some final miscellaneous thoughts (for now)...

This photo from the Buffalo News shows the house of my 3rd grade teacher, center top. This is the same one that appeared here in profile with the fire in the background a few days ago (thanks Terry, I didn't recognize it). The side yard that now harbors a green tent is where her dog runs in better times. She wasn't home at the time of the crash.

Rumor has it that Goodrich Road had to be shut down again yesterday because of lookie-loos. It's rather presumptuous of people to be tramping all over someone else's property to get a closer look at the site.

On that Facebook proposal to have Extreme Makeover come in and rebuild the house - it's well meaning, but is that what the family really wants?

The reader comments after the article on the subject on Buffalo Rising pretty much echo that sentiment also. The crew can't build any cute kids rooms as per their normal business mode. What are they going to do - attempt to replace the sports memorabilia and historical maps in a set-aside room? There can be no replacement.

In fact, I'd be willing to bet that there has been some discussion in the Town about creating a memorial park there or something like that. That would be a great idea, but ultimately it's up to Karen Wielinski.

The cleanup may wrap up soon, but the investigation will continue for quite some time. For some, time stopped the night of February 12th. For family and friends of the victims, life as they know it will never be the same. For people of the town, especially for those closest to the crash site, the struggle to return to some semblance of normalcy will be a long one...
Posted by Becky at 6:09 AM 3 comments:
Labels: Crash of Flight 3407, Town of Clarence

In Memory of Jennifer Neill 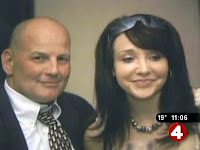 Clarence alumna ('92) Jennifer Neill was among the victims in the crash of Flight 3407. From the Buffalo News:

"Jennifer Neill, 34, was pregnant with her first child.

“She was due at the end of May,” said her mother, Mary Neill. Jennifer lived with her parents in Clarence.

Her fiance, Todd Eacker, a physician’s assistant, was in Florida visiting his sister when the plane went down. The last time he spoke with Neill was while she was at the Newark airport waiting for the plane to depart, her father, James, said.

A pharmaceutical sales representative for Shearing-Plough for the past several years, Jennifer left Wednesday morning for New York City for a business trip and was on her way back home on Flight 3407...

“The happy part is that she was a very happy and upbeat person,” Mary Neill said.

“She is just a wonderful daughter…She is a very ambitious and a very bright girl,” James said..

In addition to her parents and fiance, Jennifer is survived by two brothers, Brendan and Patrick, a major in the Air Force, who was a safety officer and flew commercially at one time, James Neill said."

"Jennifer E. Neill (34), was a Clarence native. She attended Clarence Central High School, where she was First Chair Flutist in the band and also played softball and basketball. She held an Associates degree in Physical Therapy from SUNY Geneseo and a Bachelor's degree in Health Sciences from the University at Buffalo. She worked in the physical therapy department at Women and Children's Hospital of Buffalo. She and her fiance, Todd Eacker, were expecting their first child, a son."

Posted by Becky at 5:29 AM No comments:
Labels: Clarence High School Alumni, Clarence Musicians, Crash of Flight 3407, In Memoriam, Town of Clarence

It appears that the curious are descending on Clarence Center in droves; so much so that part of Goodrich Road had to be shut down again. I haven't ventured out that way yet. I had a feeling that in the initial stages "my mom lives over there" might not be sufficient grounds to get through. Then I'd cop an attitude. Best to stay put and talk by phone instead.

They have to investigate the scene with no interference, I get that. While the scenario is completely understandable, I'm sure I'm not the only one with a problem having to "show your papers and state your business" in your own hometown. One guy got arrested for being strident in his point of view.

While it's awesome how fast the state and federal governments came in and took charge, it's a bit scary too. Just like that some rights have been suspended and the town is under occupation, with local officials and residents no more than gnats. Many movies have been made on that theme, including "The Simpsons".

This brings out the type A & B reactions. Type A is compliant, the good citizen, resolved to do whatever the government demands, staying inside and insisting that the biggest event in this area since McKinley got shot doesn't pique their curiosity in the least bit. Type B wants to see how close they can get without getting arrested. The extreme B gets in the way.

Being more of a B type person, daughter of an A, I thought it best to wait until at least today to wander out that way. Or maybe next weekend.

Besides the family and friends of the victims, the residents of Long Street, especially in the same block, have it the roughest. Not only have they lost a neighbor and their peace of mind, not only do they live on the doorstep of a tragedy, they can't even go home. I don't think the neighborhood will return to anything vaguely resembling normal for a very long time.
Posted by Becky at 9:05 AM No comments:
Labels: Crash of Flight 3407, Town of Clarence

In Memory of Ellyce Kausner

Clarence alumna ('02) Ellyce Kausner was among those who perished in the crash of Flight 3407. She is the daughter of alumni John Kausner and Marilyn Mesler ('71). From the Buffalo News: 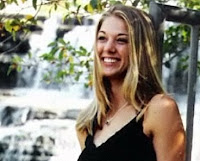 "Ellyce Kausner had a mental list of things to do in life, and methodically did them. A week or so ago she went swimming with dolphins, and no who knew her was surprised.

Known as "Elly," Kausner, 24, grew up in Clarence in a tight-knit family for whom religious faith is a central part of their lives.

She graduated from Clarence High School and Canisius College, and was a second-year student at Florida Coastal School of Law in Jacksonville. At Canisius, she won the tuition award given to a senior with the most potential for the study of law. 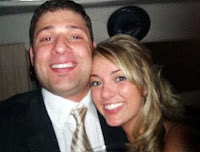 She was traveling home to visit her family and boyfriend before final exams. She also had three nephews who wanted her as their Valentine at school. Friends and family described her as bright, bubbly and magnetic. They said she was devoted to her family and loved animals, especially her two cats.

"She was the life of the party, and enjoyed being the center of attention," her father said.

He saw her just a few days ago in Florida while on vacation with his wife, Marilyn. As they parted, their last words to each other were, "I love you."

KAUSNER - Ellyce Marie Suddenly taken from us on February 12, 2009, beloved daughter of John and Marilyn (Mesler) Kausner; loving sister of Chris (Lauren) Kausner and Laura (Jeremy) Voigt; much loved aunt of John, Steven and Elizabeth Kausner and Connor and Dominic Voigt; cherished girlfriend of Daniel Bogner. The family will be present to receive friends Monday 1-4 and 6-9 at the Town of Clarence Clubhouse, 10405 Main St. in Clarence Town Park. Friends are invited to attend a Memorial Service, Tuesday morning in Lovejoy Gospel Church, 5423 Genesee St., Lancaster at 10:30. Flowers should be sent to the Town of Clarence Clubhouse, Monday after 12 Noon or memorials may be made to the Erie County SPCA in Ellyces honor. Arrangements by BEACH-TUYN FUNERAL HOME, INC.

View/Sign Guest Book
Posted by Becky at 8:20 AM No comments:
Labels: Clarence High School Alumni, Crash of Flight 3407, In Memoriam

The plane landed two blocks from my mom's house in Clarence Center. She's okay, and we're both grateful for all those who made contact (and those who thought about it). As I was talking to her last night on the telephone a plane went over. I could almost feel her cringe as she remarked on it.

Airplanes are constantly overhead. So much so that most times no one paid much attention, like it was part of the background noise. It'll be a long time before the people of Clarence Center feel complacent again. 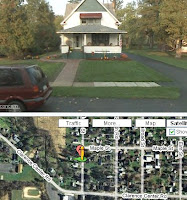 The loss of a friend and neighbor hits home even more so than the crash itself. The Wielinski family was well regarded, not only in Clarence Center but also in the Cincinnati area that they previously called home.

Doug was a Vietnam war veteran, a chemist, a former marathon runner, a sports memorabilia collector/seller; also a husband, father, neighbor, and friend to many.

One neighbor will forever remember the generosity of the Wielinski family. At one time her garage needed painting but, being on a fixed income, she couldn't afford to have it taken care of in the immediate future. She became a bit stressed about it. No problem. Doug & Karen reached into their own good natures, bought the paint, and proceeded to paint the garage themselves. Great neighbors. The best.

Now a pile of rubble sits where a loving family once resided. The memories will live on.

(picture is a screen shot from Google Earth of 6038 Long Street, scene of crash)

(moving photo galleries Rochester Democrat & Chronicle; some pictures may bring tears to the eyes of even the detached from the immediacy)
Posted by Becky at 9:22 AM 1 comment:
Labels: Crash of Flight 3407, In Memoriam/Other, Sports, Town of Clarence, Veterans 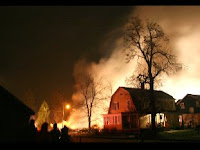 Those of you in Clarence Center already know, but for those not local or who haven't turned on a television yet, there's breaking news: Continental flight 3407 with 49 people on board crashed into a house in Clarence Center on Long Street near Clarence Center Road (by the fire hall). All have perished, in addition to one person on the ground.

I would hope this also would put an end to local discussions as to the need for all the units of the volunteer fire companies in the Town of Clarence.

Links for updates and information:

(video shot by resident appears below, from WKBW viewers input)

Thanks also to my cousins across the Atlantic Ocean who emailed me immediately with concern and caring. I retire early, and I read my email before turning on the news this morning.

Thought and prayers for all the victims and their families.
Posted by Becky at 5:39 AM 9 comments:
Labels: CCVFC, Crash of Flight 3407, Current Events, Town of Clarence
Newer Posts Older Posts Home
Subscribe to: Posts (Atom)