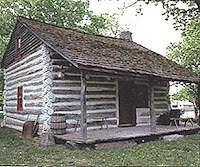 Every Sunday morning as we drove back and forth to church down Goodrich Road we passed the log cabin that was part of the Landow house. I found it endlessly fascinating, but never had the opportunity to go in.

Many years later my daughter had to make a log cabin as a school project. My mind immediately flashed to the same log cabin, now nestled securely in front of the Clarence Historical Society on Main Street. So off we went. It was a unique opportunity to give the kids a chance to see the real thing. We lucked out that day, as one of the volunteers restoring the cabin was there. He enthusiastically showed us around the inside, pointing out all the nooks and crannies that were put to utilitarian use.

We were ill-prepared at that time to appreciate all that he had told and shown us. Also, the second floor had yet to be stabilized for public viewing and safety. Luckily the WNY Heritage magazine did an in-depth story on this a few years later, complete with up-dated pictures after the restoration was complete (Summer 2004 - the issue is still available for purchase):

"The Town of Clarence, the oldest in Erie County (1808), has succeeded in restoring, for educational purposes, the best surviving pioneer Yankee log cabin in the county. The exemplary community effort restored an important architectural history document that will continue to grow in importance."

It is named after one of the early settlers in the area who was most likely the builder (Levi Goodrich), and also the last residents (the Gustav Landow family). Clarence is fortunate to have such a treasure, and also the dedicated people who took such pride and care in restoring it for all to learn from and enjoy.
Posted by Becky at 7:10 AM 2 comments:
Labels: Historic Preservation, History, Town of Clarence, WNY Heritage Magazine 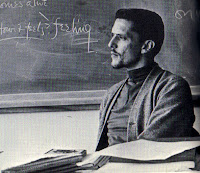 Writing a blog is a lot like writing a journal. I was introduced to the concept of journals in my sophomore year by my English teacher, Michael Ehrenreich.

Generally speaking, the wide-held belief among the class was that by having us scribble away, it freed the teacher to read a book or take care of other business. I don't recall being introduced to subjects for everyone to concentrate on for the day, although I could be wrong. It's been a few years since then.

Sue Wandyez and I sat next to each other and were "literary partners". In other words, we read each other's entries and commented. "Interesting" was about as deep as it got. We learned that from Mr. Ehrenreich too.

Many years later, Deb Moultrup dragged me to some theatrical production, or at least the cast & production crew party afterwards. Mr. Ehrenreich was there. I was finally able to get up the nerve to ask for my journal back, since he had insisted on retaining them. He looked at me like I was stupid or something and said "I threw them out".

Threw them out??? Then why did he want to keep them? Maybe he thought there was a possibility that a mere one of us would become a literary giant, and he could donate the journal to a museum for posterity. As far as I can tell, that would have been a waste of storage space. Apparently he later thought so too.

It's not like I really wanted to see how addled my brain could be back then. Shredding it would have been a preferable option. Here I can just hit "delete" (I know, nothing on the internet is gone forever, but retrieving my drivel isn't worth the effort). However, it was my opinion that it was my journal and I wanted it back..."And so, Becky, how does it feel to want?"

Just like in those journal days, maybe tomorrow I'll have something interesting to write about. I think I finally got the hang of it after all these years.

(photo is from the 1969 Saga, by Guy Brand)
Posted by Becky at 7:49 AM 1 comment:
Labels: Clarence High School Alumni, Clarence School Teachers, Nostalgia

Land Subsidence in the Town of Clarence

It turns out that underlying mines are not the only thing that can cause land subsidence in the Town of Clarence. From an article in the Buffalo News, we learn that the installing of sewer pipes, if not done in a forward-looking manner, can cause soil problems also . The photo is of Gary Wright of Old Goodrich Road, and his drained pond(from the News).

Basically, the land around Clarence and Amherst is largely compacted clay. When a sewer line is put in, the land is dug up, pipe laid, and the area is filled back in. Therein lies the problem. The fill is no where near as compacted as it started out, and water is sucked in to fill the gaps. A simple example of this comes from, of all places, an article on time management called "Cup of Coffee with a Friend", which illustrates that even when you think the container is full (of golf balls, then pebbles, then sand) there is always room for more (coffee).

The real life corollary is that when the trench is filled with dirt and gravel, it has room for water, which comes from nearby clay and groundwater. This dries out the land causing shrinking, which in turn cracks basements, creates sinkholes, and drains ponds.

One would like to think that those in the construction industry would act responsibly on their own, after all, it's their reputations. The truth of the matter is, for the most part, that they do the bare minimum of what is required by existing law. When they don't, they get fined and forced to do it right. The towns don't seem to ask for more either, as that might hold up construction or add to the expense.

Ideally, everyone would want to do the right thing all the time, no matter what the cost. There is a method involving "check dams" that helps to prevent this scenario. The Town of Amherst requires them on water lines, but not sewer (?). Erie County uses them on their own sewer lines in the Southtowns. They are commonly required throughout the country to protect wetlands, or to keep dry areas from becoming even drier.

In reality, it's whatever is the most convenient, until laws are changed to benefit the homeowner and enforce accountability by contractors and the areas effected. Incidentally, the Town of Clarence rejects claims that the problems are related to the sewer construction. The engineer from the Town of Amherst finds it to be an "interesting theory."
Posted by Becky at 5:54 AM No comments:
Labels: Environment, Land Subsidence, Town of Clarence
Newer Posts Older Posts Home
Subscribe to: Posts (Atom)