One for the Road: Labor Day Picnic

Didn't want to leave on a down note! Labor Day weekend is synonymous with Clarence Center in the minds of many, and the time spent at the park is treasured! This is recycled from 2009:

A few days ago I had shots of Friday night before the festivities at the Clarence Center Labor picnic weekend began. Here are they are again compared with the same spots right after the parade (the beer tent is still filling up).

The entrance at Clarence Center Road and Long Street: 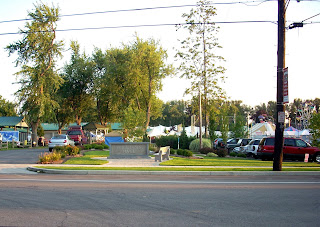 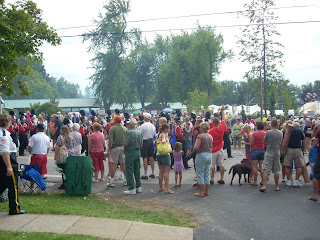 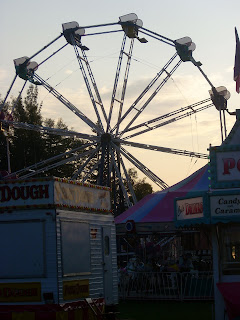 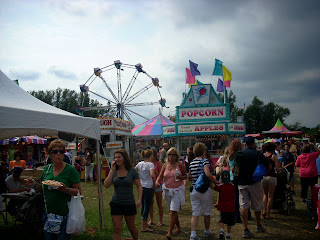 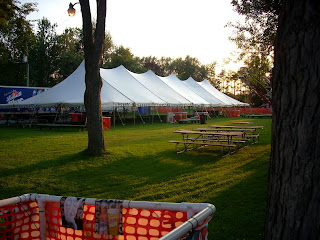 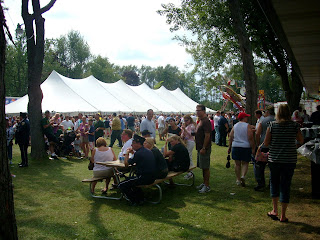 Thanks to the Clarence Center Volunteer Fire Company for the eagerly anticipated and enjoyed Labor Day Picnic, and to firefighters everywhere for their dedication and service to the community.
Posted by Becky at 8:06 AM No comments:

Obviously, I haven't been into writing the blog for quite some time now, so I'm going to take the suspense out of it and shut it down. "Hiatus" gives the impression that I'll be back, so I'm not going to play around with that, although I have no plans for removing the blog itself from online. Even though the common wisdom is that internet means forever, unless you're an IT person it can be very difficult to find anything ever again once you've slipped from search engine algorithmic settings!

I had been tossing around the closure for a while, and as recently as a few days ago, when the picture below came to my attention...sort of cemented it for me.  The upcoming Labor Day weekend plays into it in its own way too.

Its been almost 40 years since I moved away from Clarence Center and into Buffalo, and I've never regretted it. As such, I may be interested in the long ago history, but current events, not so much. I can toss out opinions that are guaranteed to piss people off, but why bother? It's not mine anymore, hasn't been, and isn't going to be.

Labor Day in Clarence Center is when many of us get together again, one weekend out of the year, and it's great to see everyone again! Of course, some see each other all the time, and that is good. Others I see from a distance, people I haven't spoken to in many, many years. They still hold a place in my heart, but we've all moved on. Such is life.

I'm not retiring from work yet (unfortunately, but yet fortunately, I can), but one never knows. Life is what happens when you're busy making other plans, and all that.

I find that most of the topics I want to write about, I already have. Opinion hasn't changed much either, so it has become rather stagnant...Buffalo rocks, the Bills  are in chronic "next year", and been hoping Ruff would get the ax for years over in Sabreland. I'm still a Democrat in philosophy, although politicians themselves can enthuse or deflate, regardless of which logo they are wearing.

Ironically, I'm still writing, but doing it the old fashioned way via paper and pen, rather than leaving scribbles all over the internet :)

I've been traveling in a different direction for a while now...The blog is part of the old, and sometimes one needs to make the declaration that it's past time to cut the cord, rather than leaving it as somehow implied. It's time!

Thanks for reading -it's been real :) Peace, love, light, and laughter to you all! 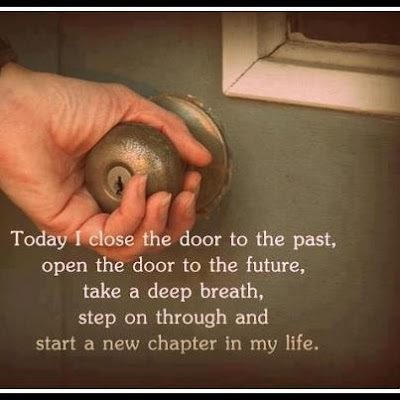 Clarence alumnus ('72) Curtis Lipke passed away after a battle with pancreatic cancer. We had not been able to locate him, but I'm sure we would have sent notes had we known. Rest in peace, Curt...

From the Salt Lake Tribune:

Curtis Wesley Lipke1954-2012Curtis Wesley Lipke, 58, of Salt Lake City, Utah, passed away August 3, 2012 in his home surrounded by family and friends, after a heroic battle with pancreatic cancer that lasted three years and eight months. During that time, he not only found ways to have a wonderful quality of life, but also was an inspiration to everyone he encountered. His strength of mind, body and spirit carried him through his battle.
Curt was born July 6, 1954, and raised in Buffalo, New York, in a family of four brothers and one sister, with loving caring parents, Dr. Ken and Patricia Lipke, who taught them principled values and a strong work ethic. Curt graduated from Clarence Central High School.
An avid competitor and extreme athlete most of his life, Curt realized in his early teens that he had a tremendous passion for skiing. He quickly perfected those skills and became a ski instructor at Bluemont Ski Area outside of Buffalo. It was only fitting that skiing should play a major role in his decision about college, which took him to the University of Utah amidst some of the best skiing in the country.
Curt's love for skiing and his fondness for Utah made it difficult to return to Buffalo after graduation in business studies at the University of Utah, but he went back and joined his family business, then called Gibraltar Steel Corporation. He applied himself diligently to his career and worked his way to become divisional president. The company was publicly traded in 1983 and Curt was elected to the Board of Directors.
His love of skiing and Utah were always on his mind and, receiving some good advice from his mother, he decided to follow his dream and return to Salt Lake City.
Curt was always very athletic and competitive, and in addition to skiing and ski racing, he thrived on endurance sports, competing in triathlons and taking second place in the World Seniors Games. His passions also included mountain bike races, road races and foot races. He spent many years enjoying the outdoors and participating in everything from riding his Harley to jumping doubles on his motor cross bike. He is a graduate of the Skip Barber and Spring Mountain Race Car Driving Schools.Many marveled at his ability to continue competing and winning events during his battle with cancer. One of his many mottos was, "Pain is just weakness leaving the body."
Doctors at the Huntsman Cancer Hospital, where he received treatments, often called on Curt to speak with other patients. He was able to provide support and guidance and to demonstrate that, yes, you can have a high quality of life even while battling cancer. He took great pride in helping other patients.
Curt is survived by his beloved wife, Linda Mulkey, his mother, Patricia Lipke, brothers Neil (Shannon), Eric (Janine), Brian (Debbie) and sister Meredith, nieces Carlisle, Katie, Elissa and Erica, nephew Kenneth, and canine kids Sally and Alvin. Curt was predeceased by his father, Dr. Ken Lipke, and his stepdaughter Lauren Elizabeth Mulkey.
Curt and Linda were two angels, drawn together to help each other survive some of the greatest challenges life can bring us, including the sudden death of Linda's daughter Lauren and Curt's journey with cancer. Together they enjoyed life to the fullest with their dogs, skiing, trips to Las Vegas, and sharing their lives with so many friends.
Lauren absolutely adored Curt, as did all of her friends. They have stayed in Curt and Linda's life and remained close throughout Curt's illness.
The family wishes to extend tremendous thanks to all of the dedicated doctors and staff at the Huntsman Cancer Center and the huge outpouring of care, concern and love from their friends.Curt knew what it took to be a friend, and because of that, he had many. He will be forever in our hearts.
A memorial service to celebrate Curt's life will be held at 11:30 am on Wednesday, August 8, 2012, in the Courage Theatre, Jewett Center, at Westminster College, 1840 South 1300 East, Salt Lake City. Curt requested that everyone who attends, please wear bright-colored or Hawaiian shirts.In lieu of flowers, please consider donations to the Huntsman Cancer Institute or Intermountain Therapy Animals. Online condolences may be sent at www.larkinmortuary.com.
Posted by Becky at 5:03 PM No comments:
Labels: Clarence High School Alumni, Class 72, In Memoriam
Newer Posts Older Posts Home
Subscribe to: Posts (Atom)