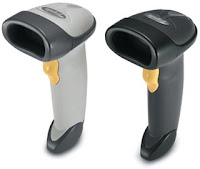 Somewhere in the late 1980's retail establishments challenged item pricing laws (having to price each unit for sale individually). Scanning the bar code had become the new way at the check out and it was argued that placing those little stickers was time-consuming and price changes made them messy. There also was the documented fraud by some customers changing or peeling off those little buggers.

Erie County enacted a Scanner Accuracy Law that in exchange for an item pricing waiver the stores must be held accountable for the accuracy of the scanners, with escalating penalties for violations. This requires customer vigilance, but so be it.

In the early days going to a certain supermarket was like picking up money laying on the ground. They were really bad at scanner accuracy. With 2 kids in diapers this was a boon for my finances. See, the "prize" for catching mistakes is 10 times the amount of the error, not to exceed $10. Plus the overcharge, of course. So a $1 overcharge would lead to an $11 payout. The stores face escalating fines and mandatory reporting to the Department of Weights & Measures.

The stores themselves have become experts at attempting to circumvent the penalties. Store managers have claimed that since the item in hand weighed 7.2 ounces and the ad said 7.5 ounces, it doesn't count (shelf tags rule). Or the item was out of place (doesn't count). Pointing out a pricing error during the checkout results in "But you WEREN'T overcharged, I corrected it - doesn't count".

I really haven't been pouring over my receipts lately or memorizing the prices. Scanners and pricing have become such a retail obsession that it's really not worth the effort. An apparent $5 error changed that however.

Last night at "Bull's Eye" I finally picked up McAfee Virus Scan after looking at it for the weeks leading up to the current expiration of my old product. There had been 4 units on the top shelf with a tag reading $29.99 for over a week (I can be indecisive). Finally I bought it, got home and realized I had been charged $34.99. So I went back.

The girl at customer service called electronics. Rather than ask for a mere price check, she specifically stated to the lad what I had been charged versus my claimed price. I decided to go to the store shelf to meet him. Lo and behold, all the units had been moved to a lower shelf with a corresponding shelf tag of $34.99!

As it turns out, there were 2 separate products, one being for single computers, the other for multiple PC's and they had 2 different prices. But rather than explain to me that the items were mis-shelved (if the kid had realized this), there was attempted deception. In fact, after reading both shelf tags, I had to explain it to the kid multiple times how I had been mistaken (I wasn't trying to rip off the store). "The products are NOT the same. See - this one says 3 PC's, this one doesn't."

I exchanged products to the smirk of the CS rep, got what I had originally intended, and went home.

The big thing is, the employees appear to have been taught to do whatever it takes to avoid being in violation of the scanner accuracy law. Prompting the price checker. Moving the product. Whatever else might be in their barrel of tricks to avoid responsibility, if indeed they are in violation.

I blame management and top-down pressure that they face, as the kids are too young and they have no real stake in any customer-centric outcome (unless they are somehow penalized as part of their employment).

I was mistaken, but the store was wrong.

My son said "Who cares?"

I do. In my opinion, maybe you should too.