Samuel F. Nappo of Clarence, the owner of a local advertising and printing company, died Monday while visiting family in Rock Hill, S. C. He was 66.
Born in Buffalo, he was raised in Clarence and was a 1964 graduate of Clarence High School. He served in the Army from 1965 to 1967 and was stationed in Korea.
Mr. Nappo was the owner, president and chief executive officer of Community Advantage, a Clarence based business that specializes in coupon mailings and place mat advertising. Prior to that, he owned a company called Bulletin of the Week, and he printed Catholic church bulletins.
He was a member of St. Mary’s Parish in Swormville and was an usher at the church.
He is survived by his wife of 25 years, the former Karen S. Salzer; two daughters, Joelle Toner and Samantha; a son, James Anzalone; and a sister, Marie Mohring.
A Mass of Christian Burial will be offered at 10:30 a. m. Saturday in St. Mary’s Catholic Church, 6919 Transit Road, Swormville.

NAPPO - Samuel F. Suddenly on December 26, 2011, beloved husband of Karen (nee Salzer) Nappo; devoted father of Samantha Nappo, Joelle (Donald) Toner and James (Darcie) Anzalone; loving "Poppy" of Donny, Nicole and Madeline; dear brother of Marie (Geoffrey) Mohring; son of the late Samuel J. and Mary (nee Scimia) Nappo; brother-in-law of Karleen Salzer; also survived by aunts, uncles, cousins, nieces and nephews. The family will be present on Thursday from 6-8 PM and Friday from 4-8 PM at the (Amherst Chapel) AMIGONE FUNERAL HOME, INC., 5200 Sheridan Drive (corner of Hopkins Rd). A Mass of Christian Burial will be celebrated on Saturday at 10:30 AM from St. Mary's Church, Swormville. Please assemble at Church. In lieu of flowers, memorials may be made to the Leukemia & Lymphoma Society or Roswell Park Alliance Foundation. Please share condolences online atwww.AMIGONE.com

If you read the Buffalo News lately, you might be aware that Clarence alumnus ('99) Chad Michael Murray has written a graphic novel (intense comic book) called Everlast. While he will be at the Barnes & Nobel on Niagara Falls Boulevard tonight at 7pm signing copies, you can pick one up now if standing in a long line potentially filled with giggling females isn't your thing.  I got my copy last night.

Not having had the time to do more than glance at a few pages quickly, I have no in-depth review to offer, but that won't stop me from making a few quick comments:

- The idea for the story line came from a conversation with and/or literature left by a familiar door to door religious organization...He answered the door???

- That said, most ideas for stories come from random observations, and the subject matter lends itself to an excellent "What if..." scenario.

- I had read some conjecture online that Murray is merely expanding his public footprint, however that seems a bit cynical to me.  In my opinion, he was able and is motivated to do something that really interests him, and that's always a good thing and worthy of support.

- In the picayune category, I would have preferred a soft cover instead of the hard cover style...more comic bookish...

Everlast is available in bookstores and online (where it's less expensive)...Who knew that B&N online was separate from the store and had different abilities to price things?  Fewer real people to employ, more computerization...Support a brick n mortar bookstore and go pick up a copy of Everlast!
Posted by Becky at 7:54 AM No comments:
Labels: Books, Clarence High School Alumni

After an accident at home, Clarence alumnus ('71) Richard Wood has passed away. Rest in Peace.

Online tributes may be sent to www.denglerrobertspernafuneral.com or  Visit Guest Book
Posted by Becky at 6:55 AM No comments:
Labels: Clarence High School Alumni, In Memoriam

As a wee lad William Robert came to America with his family in 1914 from the area of United Kingdom now known as North Ireland (which was not established until 1922). His father's birthplace was Drumfin, over in the Catholic part, and I'm not so much guessing that things were a bit unsettled there, what with a War of Independence to start in 1916.

Father Adam already had 3 brothers and 3 nephews here (and a sister in Oregon), so Buffalo was a natural destination for the family, which included 8 children. William Robert was the youngest.

Somewhere along the line William Robert bought a camera and started taking pictures.  The slides that came into my possession were all dated 1955-1957. Most were scenery type shots, and I forwarded them on to folks who might appreciate them more, but I kept a few.

Even though these have family in them, they are distinctive also for the dense neighborhood that once existed in the area of Goodell and Mulberry Streets, stretching on down to Virginia and all points around.  It's now known as the start of the Goodell ramp onto the Kensington Expressway.  The rest has been leveled....Urban "Renewal"...been "shovel ready" for nigh on 50 years now...

Back in the 50's a service station was located at 223 Goodell at Mulberry. The family lived nearby and many members worked there at one time or other.  May have even owned it for all I know, seeing as Father Adam's brother Arthur once owned a gas station at 179 Ellicott at the turn of the century.  Gave jobs to his brothers and nephews when they first came to America...another story there.

Anyway, I had hoped the slides would turn into better pictures, but having chosen convenience over perfection, it is what it is....A blast from the past... 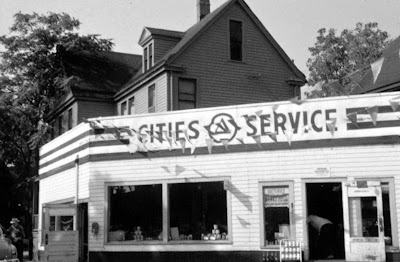 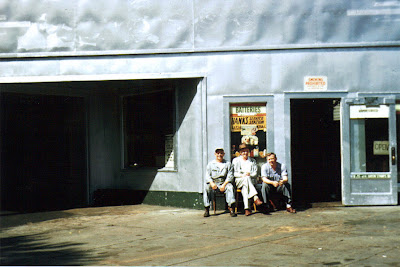 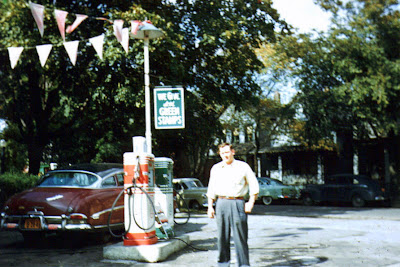 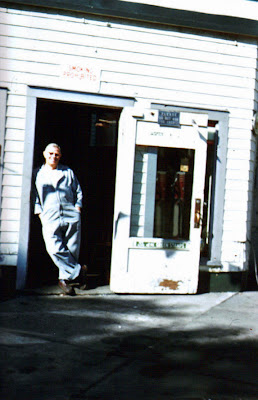 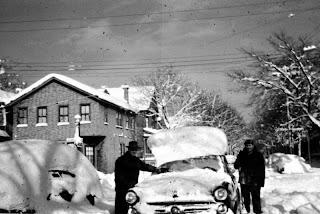 William Robert passed away in 1987, the last of his siblings.  I wish I could say that I remembered them better, but since they were my grandfather's cousins, you can guess where that went...But at least these slides were someone's discards these past 24 years, so that they could become treasures again! 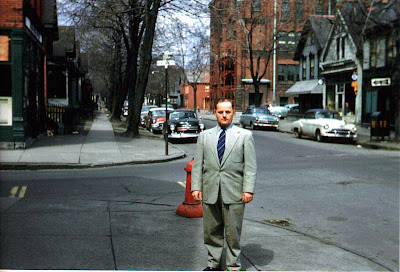 My grandfather's cousin,William Robert, came to America with his family as a wee lad in 1914. He was the youngest of 8 children, and would be the last to pass on. Unmarried, he and his sister Lydia bought a home on Perry Street in the 1950's. After his passing in 1987, the house appears to have been left to a nephew, who in turn somewhat signed it over to someone else (possibly a family member).

I say "somewhat" because for some reason the deed may have had an error and the name never actually switched over for the purpose of tax rolls and other legal  type matters such as housing inspections. Eventually the taxes were no longer paid and the house was sold at a City foreclosure sale to an acquaintance. Before it was sold again, same process, I was able to go in and take a few pictures, gather a few mementos.  A lot of the original contents had remained.

Previously, a portion of an article in ArtVoice, "No Vacancy", seemed to be describing the home, so I saved the link, and now have added pictures. Although the damage was mostly in the middle, not front, of the house (as in the 3rd paragraph of the article), it just fits, even if not the same. The pertinent part:

"Tracy Krug and Kevin Coyne act as Comerford’s sheriffs. They spend their days cruising the streets of the city checking on problem properties, helping Comerford decide whether a building is in need of demolition. In Buffalo’s most blighted neighborhoods, they have become familiar faces.

“People get to know you,” Krug says. ”The first thing they ask when you get out is, ‘When are you knocking it down?’”

One afternoon this summer, Krug and Coyne pull up to a Perry Street residence... The yellow house has a locked gate blocking Krug and Coyne from getting to the side door, the only way that it is safe to enter. The floor in the living room, where the front entrance is, is so weak from water damage that it might not support their weight. 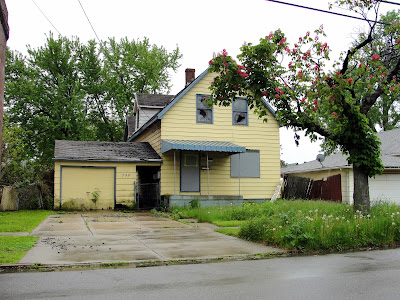 Coyne takes the fence off the post with a hammer and they proceed to the side door.
The weeds in the backyard grow as high as the roof of the garage. 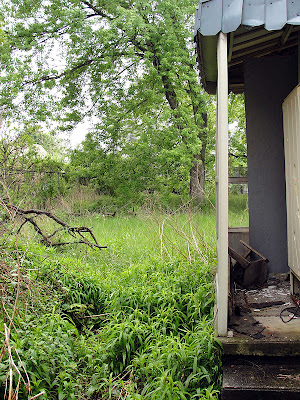 Inside, the smell of mold is pervasive. Water has been leaking through the roof and the ceiling in the living room has been crumbling onto the floor. 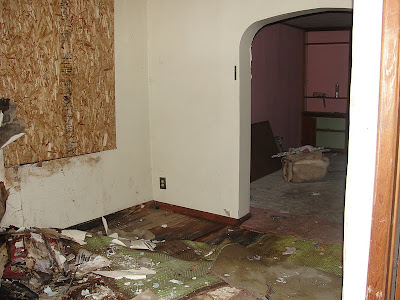 In the basement, buckets, lawn chairs, and pieces of wood float on over four feet of standing water. Only four of the steps that lead into the basement are visible. The water almost reaches the bottom of the windows (drained at time of picture). 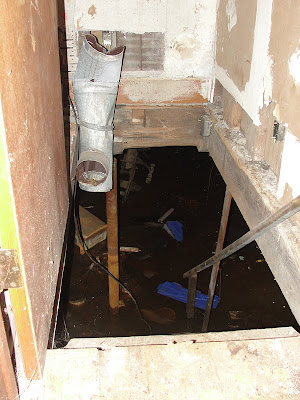 Coyne travels upstairs to check the condition of the attic. Cardboard boxes filled with collectibles, pictures, and old newspapers are scattered about. 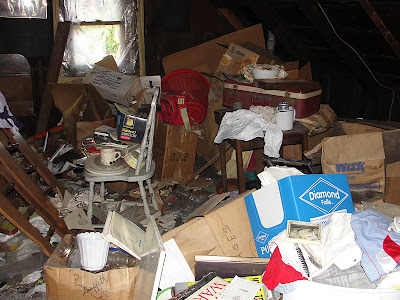 “All this cardboard makes this a fire hazard,” Coyne says.  That’s an important diagnosis: The danger posed by so many flammables in an unattended building may allow the Office of Inspections to expedite the house’s demolition.

Krug and Coyne exit the house, screw plywood over the side entrance, and put the fence back on its post. They return to the office to file paperwork on the Perry Street home and others that they had visited that day to be submitted to Comerford or housing court. Next week will be much the same."

Found amid the wreckage (most of it induced by kids and also the latest owner, while looking for salvageable items, some of which was given to me) was a tray, lovingly inscribed from one sister of William Robert to another... 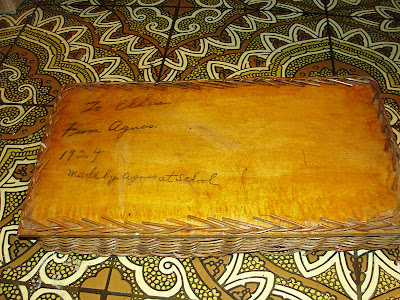 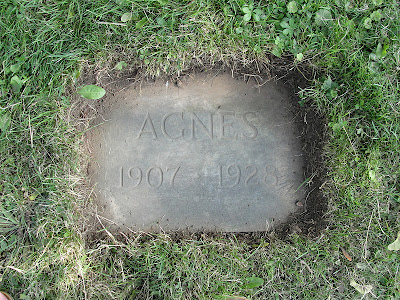 At one time these bookshelves were filled with National Geographics and other books that ended up in a crawl space on the 2nd floor (seen on a slide labeled as a test for the flash)... 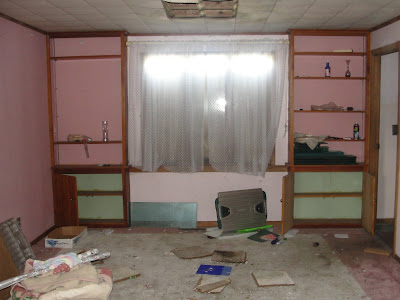 The top book by Horatio Algier flipped right out of my hand when I tried to look at it...William Robert must have wanted his childhood books to go down with the ship, as it were... 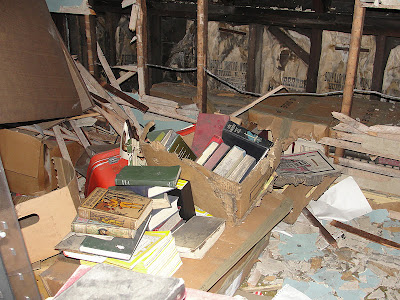 The remnants of lives well lived are now destined for a landfill, most likely. I went by there yesterday and windows were all completely smashed out, the gate removed, and even the top of the tree in front had broken off.  Our treasures may become someone else's discards (hopefully a little more gracefully), but as long as they give us comfort and while here to enjoy them, that's what matters the most.  And life goes on...
Posted by Becky at 7:13 AM No comments:
Labels: City of Buffalo
Newer Posts Older Posts Home
Subscribe to: Posts (Atom)