Clarence has it's very own notable Halloween spot on the north side of town. Last week's Art Voice picked up on it as it was doing a tour of local spooky areas:

"Lastly we park our butts outside Delaware Road off Transit as the clock inches toward midnight. No one travels down Delaware Road except fanatics like us: a dark road that never sees cars, surrounded by woods. We sit there and listen to the trees. We tell stories about local hicks who hang squirrels and like to eat 16-year-old kids. We look for the mystery of night. Then there’s no more talk, just the beating of our hearts, and the breaths that we take, until someone lights a cigarette and says, “I’m tired. Let’s get out of here.”

The first issue I have with it is the location, obviously. It's not directly off of Transit, rather it's between Goodrich and Salt Roads in the part of town known as Wolcottsburg. Local hicks? Well, this IS campfire scary story time after all.

I also saw another Delaware Road mention online on StrangeUSA from 2006:

"In the early morning hours of spring and fall driving down this old carriage road you can feel a presence of old world culture. If on the right night one can make out a man standing roadside holding a lantern, and two feet on the right or left you can see a young girl waiting with the man for something. Warning: Rumors of a kid beaten pretty badly, please do not stop, it may not be safe."

Oh pooh. What rumors? However it has been little more than a wide heavily wooded trail for over 150 years, so something may have happened. Spooky it is. Not safe? At least it's paved now, which it wasn't in the 60's and before. Driving down two muddy tire ruts going through the closely hovering trees in the midnight hour or any other time brings fears of getting stuck, but that's about it...Of course, if stuck, all those other hobgoblins may come shuffling out of the woods :) 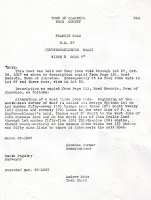 Back in the day when this route was first carved through the forest it was called Kupferschleeger Road (aka Francis Road) after the farmer whose property it bordered. Remember there was a predominant Prussian-German community there at the time. In fact the corner on Goodrich was site to many festivities in the late 1800's, including a beer garden and the first carousal. Probably was spooky then too if someone wandered off.

According to a book written by Clarence alumnus ('84) and teacher Doug Kohler about the North Country of Clarence, the white-sheeted ones came to town in the early 1920's and held a rally deep on the road in 1924. Now THAT'S scary.

The first time I drove my kids down there while killing time they freaked out, and it was broad daylight...Daylight in the outside world that is. The woods have a way of taking time away and replacing it with an otherwordly experience. "Mom, are you sure you know where we are? Mom, can we leave now? Mom?" There's only so fast you can safely drive from one end to the other. Besides, I wanted to savor the atmosphere:)

This Halloween night, or any other time for that matter, check it out for yourself. Woooo!

Posted by Becky at 5:10 AM No comments:
Labels: Clarence High School Alumni, Class 72, In Memoriam

Long time Clarence school teacher Herbert Bosch passed away on October 2, 2008. I never had him for English, but Budd Bailey ('73) recalls him as the teacher that cured him of any interest in reading Shakespeare after junior year elective. However he's willing to concede that Shakespeare was more to blame for that than Mr. Bosch.

The '69 Saga had a two page photo spread in appreciation of Mr. Bosch, and I borrowed a few of the pictures to share here (photo from later years appeared in the News).

Born in Port Jervis, the Elma resident came to Buffalo with his family in the late 1920s. He attended School 54 and Fosdick- Masten Park High School.

Before retiring in 1984, he taught for 31 years, starting at Cattaraugus and Amherst Central high schools. His last 25 years as a full-time teacher were at Clarence High, where he was known for singing “The Night Before Christmas” before the annual holiday break and once narrating a school band performance of “Peter and the Wolf” in Kleinhans Music Hall.

After retiring, he was a substitute teacher at Iroquois Central High School for many years. A lover of history and nature, he volunteered at Tifft and Beaver Meadow nature preserves and was president of the Elma Library board.

A memorial service will be at 3 p. m. Oct. 25 in St. John’s Lutheran Church on Woodward Road in Elma.