Lisa Earle McLeod has a column about suicide in today's Buffalo News. She deals mainly with the legacy that devastates immediate families. I'd like to go a step further regarding the person who didn't marry, didn't have kids. Other people are still affected and are left try to deal with the mind-numbing senselessness of it all.

My neighbor John was the all around handyman of the block. He was the first person everyone called when something needed fixing, and he always had a smile on his face. About a month ago he hung himself.

To say that we all were shocked beyond belief is understating it. Apparently he'd had some legal problems initiated by tenants, but still...Useless speculation wonders if alcohol played a role in irreversible decision making.

It seems so incredibly selfish to say that everywhere I look in this house I see something he had fixed or something that he had yet to get around to. The Sunday night before he had called to tell me he'd be picking up some leftover parts the next day that were still in my kitchen. He said he'd been "under the weather" for a few days. Then his girlfriend called Monday night to see if he had shown up (no). She sounded worried "It's not like him..." before she cut herself off.

Then we got the news. It still messes with my head a bit. I can't imagine the emptiness felt by all of his many close friends. I can't imagine how his girlfriend must feel, especially since she was the one who found him at his cottage retreat. "My girl" he always called her. They were going to get married.

For me to call him a friend might be pushing it, but yet the term 'acquaintance' seems so cold. Somewhere in the middle, someone who was part of my life and part of the fabric of the neighborhood.

The now-vacant house on the corner looms large, seen every time we enter the street. I'm sure I'm speaking for all when I say that we wish John could've forced himself to see the stress through. We all miss John's presence in our lives.

So long, neighbor. So long, friend.
Posted by Becky at 8:59 AM No comments: 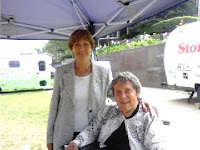 The following originally appeared as part of a larger post about an alumni mom, Gretchen Stringer, back in July. She passed away Tuesday, peacefully and with her family. This is a tribute to a much admired citizen, volunteer, woman, and mother:

"Gretchen Engstrom Stringer was inducted into the WNY Women's Hall of Fame in 2001:

"Gretchen Stringer walks around with pockets full of energy, humor,inspiration and optimism, all of which she generously shares with anyone lucky enough to bump into her. And there have been scores so blessed over the decades of her business and volunteer careers. Gretchen’s distinctive style of leadership has inspired groups from Girl Scouts to Junior League provisionals, from community workers to businesswomen. Building a house, planning a celebration or serving a client, Gretchen goes the extra mile that makes everything she touches special."

She is highly regarded for her myriad contributions to the community and work in the field of volunteer administration. The Friends of Women's Rights had this to say about Gretchen when listing her as a member of their board of directors:

"Gretchen Stringer has actively served on more than 20 community boards, including the Girl Scouts Council, NABOW, Junior League, and the Erie County Commission on the Status of Women, and has received numerous honors for her volunteerism, including induction into the Western New York Women’s Hall of Fame in 2001. In 2005, the Volunteer Administrators of Western New York established the annual Gretchen Stringer Outstanding Award in the field of volunteer administration. Gretchen is currently the President and Owner of Volunteer Consultants."

Perhaps one of her most unique accolades was being chosen to carry the Olympic torch when it traveled through WNY in 1996.

She also served on the Clarence School Board. There's so much else to say about her other contributions, books, classes, seminars, inspirations, recognitions and such. She has not only served on several boards, she has also served down in the trenches.

Now semi-retired, Mrs. Stringer did an interview with WBFO and it can be heard on their site. She was accompanied by NYS Senator Mary Lou Rath, who then participated in the memory conversation (pictured). I'm sure the 40 minutes flew by, just like the years."

Clarence alumnus ('71) Mark O'Connor passed away January 2, 2009 from the complications of diabetes. RIP.

From the Clarence Bee: Mark Baldwin O'Connor, born in Buffalo, served in the US Army from 1972 until 1974. He was a truck driver for Path Trucking in Oakfield, later working for Montogomery Tank Lines, now known as Caledonia Lines. Mark was a motorcycle and NASCAR enthusiast. 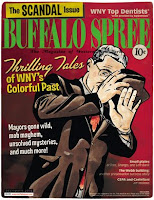 Believe it or not, I hadn't seen the December 2008 edition of Buffalo Spree until yesterday afternoon. I'm still reading it, but already have come across references to "Hooded Knights on the Niagara" and Mike Rizzo's knowledge of Mob lore, this time concentrating on Buffalo (I'm actually more familiar with Mike's book "998", which is about Buffalo's retailing history).

Eerie coincidence, as I just wrote about these subjects the last few days.

And the cover! There are more throughout the magazine also used to introduce different subjects. That was part of what drew me to the magazine, besides the tales of scandal in Buffalo's history. I used a romance comic book cover just a few days ago myself when writing about the Buffalo Sabres.

Far from copying, as I hadn't seen Spree yet, I used to read these things back in the day, along with versions of Weird Tales, including Creepshow (the comic book) by Stephen King. I could relate, you might say.

"Every region has its share of controversial happenings, from truly infamous crimes to merely ironic mishaps, and Western New York is no exception. This month we explore exciting tales of mob bosses, shady mayors, unsolved mysteries, and society murders. We’ve even tracked down some sports controversies and put together a scandal map and timeline. Spree might not know where all the bodies are buried, but we’ve certainly got some fascinating stories to share. It’s a mad, mad, mad, mad world, and WNY has contributed its share."

As far as I can tell, back issues of Buffalo Spree aren't available through their website, but maybe you know someone who has it in their magazine rack. Too bad I didn't pick this up when it first came out in order to give you a chance to buy your own copy...Lots of research went into this fascinating issue. Good read!
Posted by Becky at 6:13 AM 2 comments:
Labels: Books, City of Buffalo

(About a month ago I bought 2 books to read, little realizing at the time that they both occupied the same space in time - the early 1920's in WNY. They also intersect briefly regarding an incident or two in the much broader common ground of Prohibition. They were not on the same side.)

Stefano Magaddino was a recent immigrant and Catholic by birth. This alone would have put him in the cross-hairs of the hooded knights. Like he even cared about them. However Magaddino wasn't fighting against the laws mandating Prohibition. Far from it. There was money to be made, and lots of it. The Buffalo-Niagara region was just the place to do it.

It was business, strictly business.

The Anti-Saloon League was a minor irritant at first. Once they hitched their wagon to the kkk they became emboldened. Petty bottle smashings started turning into a few major inconveniences for Magaddino and company. An annoying itch had become a pain in the posterior. You might say it caught their attention.

Don Stefano Magaddino was The Man in the Buffalo-Niagara Falls region and throughout southern Ontario. You might say he had the ins and outs of liquor smuggling covered, and much more.

A few fire-bombings later the preachers decided that maybe membership in the kkk wasn't all they had thought it would be. The sheets didn't give them quite the anonymity they craved, and certainly didn't protect them.

"Hooded Knights on the Niagara" was written using documentation from the 1920's. That means there was no mention of the Mob, as it didn't exist as far as periodicals of that time were concerned. Hoodlums and bootleggers also get scant attention.

For information on what else was happening regarding Prohibition on the Niagara Frontier back in the 1920's you need look no further than the life and times of Stefano Magaddino as described in "Mob Boss" by Mike Hudson. That's where you'll get the scoop on the men behind the steady influx of alcohol during this period.

Ever since reading the Reader's Digest condensed version of "The Valachi Papers" in one sitting while being the only kid at my aunt's house one long ago Thanksgiving, I have read many books that furthered the subject matter. "Mob Boss" fills in many of the blanks regarding the Outfit throughout WNY history. Facts are rounded out with folklore and memories of those who remember when.

I almost forgot - another look at Magaddino can be had through The Mob Tours, conducted in Niagara Falls by local author and historian Mike Rizzo. The website is pretty interesting too.

Two books, two viewpoints presented on facets of life during the Roaring 20's in WNY. I'm sure there are many more out there too. In fact, I may have a few of them on my bookshelf...
Posted by Becky at 6:30 AM 1 comment:
Labels: Books, History

About a month ago I bought 2 books to read, little realizing at the time that they both occupied the same space in time - the early 1920's in WNY. They also intersect briefly regarding an incident or two in the much broader common ground of Prohibition. They were not on the same side.

After reading that the hooded knights had convened on Delaware Road and a few other places in Clarence in one of the books of Clarence alumnus Doug Kohler ('84), I became intrigued. This seemed at odds with the official bucolic history of the area. Some things just aren't spoken in polite company.

"Hooded Knights on the Niagara" by Shawn Lay covers the history of the resurrection of the kkk, their seduction of native-born white Protestants in the Buffalo area, and the attendant ugliness. Catholics and immigrants (many of whom were Catholic) were the main targets, with Prohibition being the glue that tied it all together.

Let me clarify now that the book is mainly centered in Buffalo and doesn't shed much light on the dark side of Clarence in the 1920's. Speculation has it that immigrants coming to work in the mines may have had some in an uproar, especially since many were the despised Catholics (heavily promoted by Protestant ministers were rumors of a plot by the Pope to take over America and become a foreign ruler, among other things).

German-Americans proved to be particularly susceptible to the allure of the group, perhaps in part due to being singled out and spat upon during the Great War. This was their chance to be oppressors rather than the oppressed. Curious how that works sometimes.

The preachers were on a rampage. Alcohol and Catholics were the main targets. Card playing and dancing were also looked upon as gateways to evils, which included gambling and prostitution.

The kkk sidled in and adjusted their agenda to specifically address these concerns, all to gain members and the accompanying dues and other fees. They also offered much valued secrecy and pageantry. The masons and other such organizations were big back then. Bottom line - money for the organization, anonymity for the members, power for both.

It was around this time that Stefano Magaddino moved to Niagara Falls.