When former County legislator Ray Dusza died recently few thought to mention that he was a champion for the Erie County Scanner Accuracy Law. Maybe the newspeople thought it was no longer in effect or deemed it irrelevant. They would be wrong.

From an old site of the Bureau of Weights and Measures (new site under construction):

"In Erie County, we enforce provisions of Local Law 7 (1997). At all establishments, which were granted a waiver from item pricing, the store is required to pay out a 'super refund' when a pricing error occurs. This is 10 times the amount of the error, not less than $1 or more than $10, plus the amount of the error. They are required to properly fill out the County's Price Discrepancy Report and give a copy to the consumer."

On February 18, 2008 I wrote about one of my frustrating experiences in questioning a store's scanner accuracy. It devolved into a show of dishonestly, in my opinion, even though I was legitimately mistaken. It could have been handled much much better. 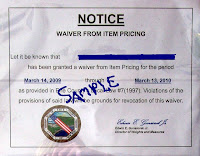 Others have faced rudeness and hostility on occasion (the store faces penalties for errors). One woman emailed me about an experience at a supermarket in which she ended up leaving the entire cart of groceries because of the way her complaint was handled. I've been there. One recent commenter was told by the manager that he had never heard of the law. He must be new in retail management.

Any store that has applied for a waiver from item pricing must have a sign posted (click photo to enlarge). I also saw a permit at a downtown store that was kind enough to allow me to photograph the signs (poorly and with my image reflected). Hard to do with constant traffic in the doorway and also a friend passing through who stopped to talk and comment "What are you DOING?", but I managed :)

I called the Bureau of Weights and Measures myself yesterday and they reaffirmed that the law is still in effect. However not every item falls under this law and there are exemptions. They also said that anyone with any questions and/or complaints should call their office at 716-825-1310.

The Bureau exists to ensure that scales, gas pumps, scanners, and other things that we tend to take for granted are accurate. They're the best!
Posted by Becky at 6:20 AM
Labels: Shopping, Technology

Thank you for your article above it was very helpful in my search for the laws that apply to overcharges due to SKI pricing.

Have you ever worked in retail? Honestly, some people make a living off of super refunds. I think that anyone who asks for a super refund is the scum of the earth.

Well Anonymous, Then so is everyone that complains about nothing at a Restaurant just to get a free meal, and so on. It's the way of the world now taking advantage of the system any way possible. Because all companies no that the way the economy is no one can afford to lose a customer. So now they control the market, The customer is always right (even when their completly wrong) thats the way it is. Which makes it even more suprising that these grocery store managers put up such a fuss over giving a max $10 refund, I work at a major restaurant chain and we give away the store over the smallest complaint. I find the majority of the general public to be very disrespectful and down right rude. It makes me sick to see how people act these days!

Whoever posted that anyone asking for a super refund is the scum of the earth is a judgemental moron. I have worked in retail for years and years and have seen legit refunds and scammers. I have only asked for a super refund twice in my life, and I'm far from the "scum of the earth". I was treated very rudely at Wal-mart when I questioned a book I was overcharged on. When the price adjustment began to take over 15 minutes and the employees were so rude it prompted me to ask for a super refund. I should've asked for on in the first place since I was overcharged several dollars and the inconvenience caused me to have to go home, return to the store, and then home again.
The other time I requested a super refund was when I realized i'd been overcharged only $7 for three items. I'd walked in the rain to my car while looking at my receipt and then walked back in the rain to the store. I had to go back and check the item's price and then went to customer service. My refund granted me under $1, but I feel the super refund was just because I had to walk back and forth in pouring rain and wait 20 minutes for the price adjustment to be resolved. I can take a long time to get a manager, get the price verified and then have the employees figure out how just give you the difference back let alone the super refund portion. Super refunds can be legit and they help make up for the time wasted when a customer realizes they've been overcharged and has to wait for an employee to fix it for them. I don't go out of my way to find super refund opportunities and could've taken advantage of them before but did not because the staff was friendly and it didn't feel worth it. When I do feel a super refund is in order, I will take it, just like the customer's at my job. Store employees need to remember that they've made a mistake which is ultimately the cause for the refund. I don't disagree that some low lifes will go around collecting price tags and afixing them to products in order to secure themselves a super refund but usually it's obvious and steps can be taken to ensure that particular shoppper does not get to scam and get refunds in the future.

I work in customer service and deal with super refunds. I must say I love giving customers super refunds when they don't expect it, but it's the ones that you can tell have searched out the wrong prices that make me extremely angry.
I do think waiting 20 mins for a refund is ridiculous. I hate when I call the scan department and it takes them forever to get back to me on a price, it wastes mine and the customer's time. If they take a particularly long time I usually refund the customer even if they are long, if the customer has been understanding of the wait.

As a former Buffalonian, I really appreciate and miss this law. I now live in Washington, DC and have to put up with scanner inaccuracy all the time. Most of the time the response is "oh that was the wrong price, the price is x," "we didn't charge you wrong," "we didn't have enough staff to change the tags on the shelf this morning," "it was shelved in the wrong place," etc....no repercussions for the store at all.

What topped the cake was when I purchased a clothing item at a major US-retail store with a price tag stating the price. It was a maternity bra and the sales clerk had to assist me and give me ones to try on (they are behind the counter). I didn't want to pay more than x-amount for the bra and told the sales clerk that; she showed me which ones were under that amount. I decided on one and really needed to walk out of the store with it on (when you need a maternity bra, you need one!).

It was rung up and after leaving the store I realized I was charged $10 more than the price on the tag. I returned to the store within 5 minutes and showed the receipt and the tag to the same clerk, who promptly took the same item off of the shelf (not mine in the bag), scanned it, and said "this one is coming up as the correct price, that one was tagged incorrectly." I'm not sure if this was deception on the part of the store (to hand me a bunch to try on with lower price tags), but I could not get the $10 difference refunded, nor could I return the bra because the tags were off.

It's frustrating. I went home to look for a similar 'super refund' law here, but there's not.

It happens all the time here that I am starting to suspect that the stores (1) don't care or (2) actually know this and use it for their advantage. It could be deception.

It's a law in which the consumer benefits which is great. Can't even tell you how many times I've gotten home from shopping only to find that I was overcharged. It's the stores responsibility to check their signs & labels that are posted. If items are on clearance the sku's should be entered in the system. And depending on how much you are buying a salesperson may catch the mistake. This saves the store money from penalties by this law. However people do take advantage by deliberately looking for mistakes. If you happen to end up in a sale which your entitled to the super refund-your not scum as another person had posted. And you could always donate your profit to someone less fortunate. :)

The law is just that!!!!!! How many have you gone shipping with your children and then get home after a long day at work, putting your stuff away, and FINALLY sit and look over your recipes to discover items that were on sale you are charged full price for???? Well the duper refund is worth the time it will take to go back, stand in line , wait for a manager, and explain not to just ONE store rep., clerk, or manager what the super refund is but then have to wait until someone that works there knows what your talking about. By that time you have a line full of folks waiting behind you mumbling under their breath as if YOUR causing all the ruckous. I mean REALLY?????? Super refund your worth EVERY CENT !!!!!!