It's All About People

The month of May has been declared "Love Knows No Boundaries" month in WNY. The best explanation for the emotion connected with the title of the song comes from one of the widows:

“My husband isn’t here to tell me he loves me, but love knows no boundaries.”

There have been various fundraisers already connected with the Crash of Flight 3407. Some have been for the benefit of the families of the victims and those from Long Street. Still others are for a memorial to serve as a focus for grief and to honor the departed.

It's understandable that many realize that the ideal time to raise money for a memorial is close to the event when many just want to Do Something. The fundraisers also serve as a community healing of sorts. However, much like the laudable idea of an Extreme Makeover replacement house, things get murky when it comes to actually implementing things on other people's property.

The site of the crash is privately owned, and Karen Wielinski has already stated that she never wants a house to rebuilt there. Even if she is in favor of a permanent memorial there, there are maintenance and liability issues. It's the same even if the Town or a larger government were able to obtain the land. The lot next door is also vacant now. No word on their plans either. 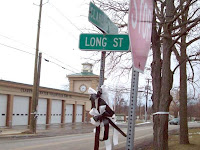 Even if something were to be erected on the grounds of the Clarence Center Volunteer Fire Company at the gateway to Long Street or on the Four Corners a block away, many are going to want to go to The Spot. That's a fact, whether people are comfortable with that or not. There are still barricades on the entrances to Long Street and No Parking signs where none existed three months ago. They need to come down.

Many of the people of Clarence Center, especially those who have lived there their entire long lives, sincerely and understandably just want things to go back to the way they used to be. Not going to happen. The best thing is to move forward, and that includes a memorial. The location to be determined at a later date needs to balance between the needs and rights of those of the area and those coming to pay tribute, or (to be perfectly honest) to sightsee. Tough job.
Posted by Becky at 6:54 AM
Labels: Crash of Flight 3407, Town of Clarence