After yesterday's post I got more comments on Facebook about Walter Kohl and his motorcycle shops than anything else. This was probably because not many were familiar with the building (except for Al Gritzmacher). Now I wanted to know more.

Still not much is known about the building other than it was built to take advantage of hydropower generated by the canal raceways below. One site has it as a cider mill built in 1880. In later years it was home to a ceramics supply among other things; being one of Walter Kohl's motorcycle shops is among them.

I also didn't learn much about Walter Kohl himself either, other than he's related much more closely (still distant) to second cousins of mine than to my branch of the family. I have the details but just take my word for it. Lots of names.

Walter Kohl loved motorcycles. He had various shops over a 50 year time period. Many remember when he was located on Transit Road north of Millersport. One site states that he was also located on 12 West Main Street in the years 1969-1973 before moving to Richmond Avenue, both in Lockport. Richmond turns into Gooding eventually, where the building I wrote about yesterday is located.

When Kohl died at the age of 82 in 2002 he had amassed quite a collection of bikes. Guess where a lot of those were stored? And there were parts, lots of parts.

Quoting quite liberally from a message board dated December 2008:

"The...owner that started putting bikes in it would basically go all over the place and any company that was going out of business or whatever, he would buy all their bikes and put them in this building. He eventually died and his wife...sold it to Frank, the current owner...Frank basically did the same thing, bought bikes, stored them there, and sold them...He's super leery about who he lets go there though because the place has been collapsing for the past 20 years.

The pictures DO NOT do this place justice. Bikes are just JAM PACKED in this place - there's mostly no walking room. It's a 4 story building (3 on the end pieces you can't really see + basement), and it's in complete disrepair... There are basically these big sized areas of the floor that have collapsed taking like 20-30 bikes at a time to their deaths, crashing from the 4th floor, through to the 3rd, through to the 2nd, straight on down to the basement. In the picture of the main floor you'll see is what we called an "island" of bikes...you can't get to because the whole damn thing is that close from caving in... 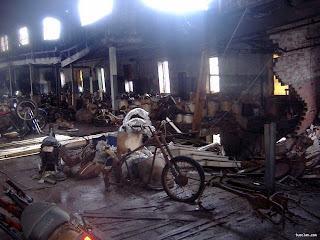 You can't even imagine what kind of treasures are to be had in that place. Rare, unique, foreign bikes that you can SCOUR THE UNIVERSE to find parts for...this guy has ROOMS, whole ROOMS, just full of, a lot of them very near brand new. 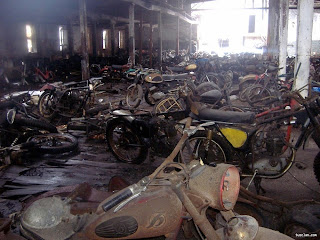 The place is so huge you could spend like two full days just looking at two floors...You just can't even imagine this place. It's amazing."

On another site a guy scoffed, saying that all the good stuff had been long gone before the current owner got it. Whatever. Obviously there was enough there to intrigue many.

Definitely the same building. This explains why there were bikes parts outside too. Not sure all his stated facts are right, but quite interesting.

Go to the message board to read the rest. Pictures used here are from there also. On the site clicking on a photo will take you to a whole strip of pictures. Check it out!

Is that neat or what?


Posted by Becky at 7:25 AM
Labels: Lockport, Other Blogs, Transportation