West Coast Perspective wrote an article about St. Mary's on the Hill today on Buffalo Rising and used a few pictures that I took last fall :) Here's another one that I used on a Wordless Wednesday prior to writing about it last December: 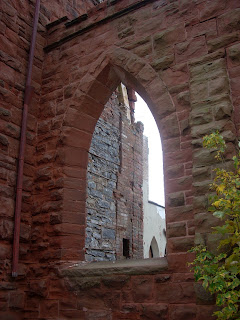 Apparently Sam Savarino wants to buy it and has some beautiful plans drawn up. The owner seems to be playing games though. Read the article for more.

Anyway, about the property at 783 Niagara Street: a few fast facts, first from the Erie County Real Property information site:

I'm going to go out on a limb here and guess that Weisburg stripped the building, because that's what he did...legally too, because he owned it (along with the Architectural Circus a block up on Niagara).


Then there's the Sale info from the City of Buffalo website:


A couple of things jump out here - that it's still listed as a religious building and that it's still assessed at $135,000 (!) despite the current owner buying at a City foreclosure sale in 2005 (deed filed in '06) for much less. It only took them a month to raise the assessment to $75,000 at the Extreme Makeover house a few blocks over at 228 Massachusetts. Meanwhile, the partial demo of the church had to set the owner back a bundle, assuming she paid the bill.

It's easy to go on about saving what's left and loving what Savarino wants to do with it, but that may only encourage the greed of the owner. Tough one. Maybe she should get out while the getting is good and leave a drop of hope in the neighborhood.

Maybe Housing Court could help the process along rather than continue with endless adjournments. Then again, maybe someone is thinking of buying and reselling to another buddy to convince investors how astute they are. It's been done before, and it's called fraud. Maybe better to sell to Savarino :)
Posted by Becky at 7:04 AM
Labels: Churches, City of Buffalo, Historic Preservation, Other Blogs, St. Mary's on the Hill